All year I’d planned on running the Midnight Run on New Year’s Eve here in Toronto. I’ve been running like a beast all year and I thought what better way to kick off the new year than to RUN full throttle into it at the stroke of midnight!

But as it grew closer, and after much deliberation, I decided I just couldn’t in good conscience justify the $95 (pre-tax) entry fee, especially since I have no desire to “party” and can’t eat or drink any of the post race offerings. Plus, given the circumstances of my year leading up to it, it simply seemed… wrong.

I contacted the organizer to see if there was a “run only” option, like the party only option, but alas, there wasn’t one.
At least not for this year. Though they were considering it for next year.

So what if absolutely NONE of that came to fruition… *sigh*

I will not be doing this event again. For a variety of reasons.

First, running at midnight. While it was fun, and a cool way to kick off the new year, there is really no way to properly prepare yourself to run at that time.  And I really didn’t think it through. I tried to hydrate and eat properly throughout the day, but the bottom-line is instead of getting up and running after a night of restorative sleep, you are putting your body into competition mode in the middle of the night, in subzero temps, after a 16hr day of running around.
The irony is that by doing something “healthy” on New Year’s Eve, I actually felt worse than hungover the next morning! LOL!

Secondly, the event itself.
I will say this first. I think they have very good intentions, but the execution is poor, the hype misguided, and the offerings misleading.
I should have heeded some of the reviews from previous years, but they were so mixed I thought I should find out for myself.
Well, now I know better. Live and learn right?

All year they’ve been promoting the amazing swag bag with this great offering by Danceology for classes. (that mysteriously disappeared from the site a few weeks before the event)
The swag bag itself was a Vector/New Balance drawstring bag (that you see at a lot of the races, in fact I think these were from another event as I’m sure I already have one) These are handy little gizmos, which I use when I travel as shoe bags or laundry bags, so ok, that works.
But what was inside this crazy valuable bag? a bunch of flyers for other races (which drives me nuts) and some free samples of food snacks and some left over halloween candy (weird) (and again, all of which I can’t eat, so I end up giving away or putting in my outreach bag) I would rather have seen the food samples go to the Food Bank (the official charity tied into the event) Oh and we got our choice of groovy event branded gloves ($10 value) or a promotor branded toque. Since I wear a ponytail when I run, I opted for the gloves. They were festive, and layered over another pair of gloves would work well on the night.

Throughout the year they were also promoting food from a different restaurant (which I looked up on line, and figured I could possibly eat some of the food) Again, the food sponsor changed within a couple of weeks of the event to Subway. hrmmm… ok.
In fact the sponsor page has ceased to work at all for a while, leading me to believe they ran into issues behind the scenes.

Still, not seeing the $95 value yet, but maybe on race night…

Race night I arrive at  Liberty Village  for the race. There is nary a sign promoting the event or even directing you to the start/finish. In fact it’s sort of eerily quiet.
I feel a bit of panic, like I’m at the wrong venue. Not the usual hype pre-race of music and noise. (now of course I realize it is 11:40pm when I get there, but it is NYE, so noise shouldn’t be an issue)

It is a small crowd. Maybe a 150-200 max. From the sounds of it, the schedule has been altered/flipped, so the “costume contest” is happening post race now at the after party. The party, which should be happening now, I see no signs of.  (it would seem no one chose the party only option… perhaps the promoters should take this as a sign)
It’s stupid cold, (still not the coldest race I’ve run) but hey, that’s part of the bragging rights, and not in the control of the promoter.
I check my bag, suck it up, head to the corral and start chatting with my fellow runners. There the adrenaline kicks in, so I don’t really feel the cold other than on my face when the wind picks up.

With a countdown and a “Happy New Year!!” we are off at the stroke of midnight!
Ok,”this is cool”, I think to myself as I mentally place a check-mark on my bucket-list.

We round the first corner and the brutal wind blasts us head on, but there is our beautiful CN Tower in the distance, a large advertising sign in the foreground emblazoned with Happy New Year, and fireworks are being set off (precariously close to the end of the path where our first turn around is) It’s beautiful and exhilarating, and (and a bit scary closer you got to the explosions)  I want to stop and take a picture to capture the magic, but that would require me to expose skin to get my phone out, and that ain’t happening!!
This sadly would be the only positive highlight of my night.

Off we go into the darkness, we do a small loop, then repeat the path and do a larger loop and return. There are a variety of terrains, which was to be expected, and  a variety of lighting situations, again we’ve been warned, but this all leads to me feeling very disoriented, If you plan on doing this event yourself, it’s in your best interest to keep up with as many folks as you can or carry your own light source. There are a handful of volunteers at key points with shiny vests and flashlights directing you, provided you finished within a certain time… as the poor buggers whom I ran into on my way home and redirected to the finishline found out as they were running aimlessly in the wrong direction once the volunteers had abandoned their posts.

There were a couple of sketchy moments. Running through a parking lot on New Year’s Eve leads to a little confusion and jumping out of the way of cars trying to enter and exit. Then of course you run into the revelers along the way. All were supportive, but you still feel odd running down a dark alley towards a bunch of drunk dudes hooting and hollering.

Anyway, 5k later, I’m heading down the chute towards the finish, awkwardly placed in the alcove, between the buildings, just past the units housing the post race food and the bag check and lounge, so people are actually crossing your path, with bowls of hot soup, as you’re running towards them to finish yelling, “scuse me, pardon me, trying to finish a race here”

And here is where the whole night fell off the rails for me.

I admit it, I’m a medal whore. I love running, but I LOVE my bling.
I have actually NOT done a certain race because I didn’t like the medal.

So… imagine for a minute that for 365 days, I have been coveting THIS: 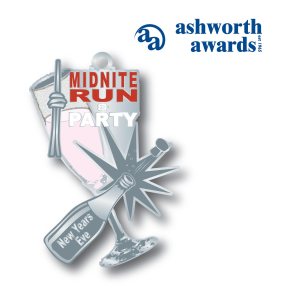 It’s the picture on the website.
It’s the medal I have held in my hand a couple of times over the season at various expos.
It’s the ONLY thing I really care about it when it comes to this particular event at this point. It’s tells the story. It’s the CN Tower, it’s the Champagne bottle, it’s the event name…
It’s the catalyst to me forking out $75+ dollars to run a 5K.

THIS is what was handed to me at the end of the race:

I actually loudly, incredulously, with disgust in my voice exclaimed “THIS is the medal?!”
I seriously wanted to cry.
All of that for cheap piece of ribbon and a generic year time stamp.

Oh, and no champagne at the finish. If you wanted that, you had to go to the party.

I went in to find my banana and some water and call it a night.
No bananas, but I found a case of water on the floor by the bag check and grabbed one for the long streetcar ride home.

The party didn’t begin for another 20 mins (at a separate location) So I could sit in the “lounge” and watch everyone eat the food I couldn’t and wait, or I could just chalk it up to experience and leave.
I chose the latter.
I was tired and slightly pissed off at that point, and didn’t want to be “that” person. I think being solo also lead to feeling a little more awkward.  Although the kudo’s I got from people on my commute home made me feel better 😉

Like I said, I get the intention of the night, and with the right execution and proper promotion, the potential is there for a spectacular event, but it’s just not working in it’s current incarnation in my humble opinion. Perhaps it needs to either be a race, or be a party. Because trying to be both doesn’t seem to be working very well at all.

I still give it a 3 out of 5, just for the hutzpah of putting on a running event in the middle of the night on NYE!

The promoter of the race reached out to me personally with an explanation and for my feedback, which is very cool. We had a long chat, and there is a possibility of me getting involved behind the scenes for this years event, which is again very cool. Coolest of all, I am now the proud owner of this: (known forever forward as “my precious” ) (fwiw, I offered up the $20 I saved on registration to the food bank in exchange for swapping out the medal)

Proud to be an ambassador for:

As I considered switching my tix for a game later in the week, my gut told me I would regret it if I did…
Oh yeah baby!!! So stinkin’proud of our boys!!! Have fun, play hard, enjoy your moment! Let's play ball!!
And thus concludes my @bluejays #hattrick #triplecrown #trifecta ? 😂Canada Day Weekend.
Our June challenge here at #TeamTap was to share what Pride means to us.
What do you do when the world is on fire, and filled with hate? You get up, put on all the rainbows and glitter, and spread love and joy!
Unfuckingbelievable…